Team SBP raises more than $30,000—and counting—for cancer research at Padres Pedal the Cause 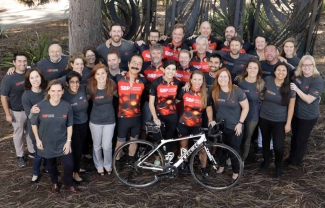 More than 60 scientists, staff and supporters of Sanford Burnham Prebys Medical Discovery Institute (SBP) ran, walked, biked and volunteered to raise critical funding for local cancer research at the 2018 Padres Pedal the Cause fundraising event. The team joined more than 2,500 individuals, including San Diego Mayor Kevin Faulconer, with a shared vision: a world without cancer.

Nearly everyone’s life has been touched by cancer, and this was no different for the individuals on team SBP. Some team members participated in honor of loved ones who had successfully beaten cancer—or had survived cancer themselves. Others joined to support research that will yield the cutting-edge cancer treatments of the future—such as personalized therapies, immunotherapies (medicines that harness an individual’s own immune system) and more.

Nick Cosford, Ph.D., a cancer survivor himself and deputy director of SBP’s NCI-designated Cancer Center, took the stage to explain how Padres Pedal the Cause funding has sparked discoveries at SBP—such as allowing a potential pancreatic cancer treatment to enter clinical trials. Seed funding provided by events such as Padres Pedal the Cause enables SBP scientists to complete the work required before applying for larger research grants, such as those from the National Institutes of Health (NIH).

Fundraising isn’t over—donations are accepted until December 8—but to date, team SBP has raised more than $31,000.

Want to help Padres Pedal the Cause meet its fundraising goal of $3 million? Support our team.

Read the San Diego Union-Tribune’s story about the event. Or see the team in action!