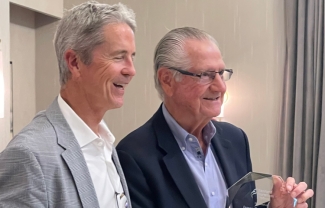 Thanks to his passion, dedication and vision, Sanford Burnham Prebys is now poised to grow into an even greater, more successful Institute dedicated to research that can improve human health.

“Jim led the ship with a steady and determined hand, setting the long-term direction of Sanford Burnham Prebys,” says Bill Gerhart, incoming Board Chair. “We’re grateful for his contributions and congratulate him on his many accomplishments.”

Gerhart presented Blair with a personalized crystal award at the most recent board meeting and led a toast, saying, “Board Chairs typically agree to serve two years, but Jim extended not once but twice, partly because I wasn’t ready to take over, and partly because the Institute valued his continued leadership.

“It’s been a real pleasure serving with you for the last nine years on the Board, and even more closely over the last four years during your time as Chair,” Gerhart continued. “You have set us up to have the most impactful period ever regarding our understanding of human biology and translating discoveries into new medicines for diseases. This is a huge accomplishment among your long list of professional accomplishments.

“Jim assembled and fueled the rocket, and today we get to light that candle and watch it roar in the coming years,” said Gerhart.

Over the course of his career, James Blair helped shape the success of more than 40 life sciences companies, including Amgen, Applied Biosystems, Amylin Pharmaceuticals and NuVasive. Blair has more than 45 years of experience starting and growing new companies in the life science field, most of which has been accomplished at Domain Associates, the firm he founded in 1985.

In addition to his contributions to Sanford Burnham Prebys, he currently serves on the Board of Directors of Axial Biotherapeutics, ChromaCode, Clovis Oncology, and InflammX Therapeutics. In recent years he has concentrated more effort in not-for-profit activities, having served on the Prostate Cancer Foundation board.  In the past, he also served on the advisory boards of the Department of Molecular Biology at Princeton University, the USC Stevens Institute for Innovation, the Caltech Division of Chemistry and Chemical Engineering, and the Department of BioEngineering at the University of Pennsylvania.

William Gerhart
William Gerhart serves as Board Chair of Sanford Burnham Prebys. He is also chief executive officer of Kinevant Sciences and entrepreneur-in-residence at Roivant Sciences. Previously, Gerhart was CEO of Respivant Sciences, a biopharmaceutical company focused on improving the lives of those suffering from pulmonary fibrosis.

Gerhart has more than 25 years of experience in launching, financing and building companies based on promising technologies. Prior to Respivant Sciences, Gerhart was co-founder and CEO of Patara Pharma, which was acquired in September 2018 by Roivant Sciences. Prior to Patara, he was president and CEO of Elevation Pharmaceuticals, a San Diego–based biotech company he co-founded in 2008 that developed a new inhaled therapy for patients with severe chronic obstructive pulmonary disease (COPD), now available as Lonhala® Magnair®. Elevation was acquired in 2012 by Sunovion, a subsidiary of Dainippon Sumitomo Pharma. Prior to Elevation, from 2002 to 2007, Gerhart was president and CEO of Mpex Pharmaceuticals, developer of Quinsair®, an inhaled antibiotic for the treatment of cystic fibrosis patients.