Towards a more sensitive and specific diagnostic test for melanoma 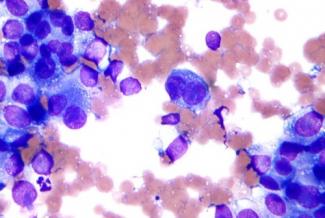 Melanoma is the leading cause of skin cancer-related death in the U.S., killing one person every hour. Part of the reason for this high mortality rate is the difficulty in distinguishing benign skin moles from malignant melanomas.

Ranjan J. Perera, Ph.D., associate professor and scientific director of the Analytical Genomics and Bioinformatics core facility at SBP, pinpoints the problem: “There is a major need for better diagnostic tests for the early, reliable detection of human melanomas. Current tests are inconclusive at least 15% of the time, requiring repeated biopsies. Our laboratory is making headway on this challenge by focusing on developing new approaches that involve regulatory (non-protein coding) RNAs.”

The functions of these non-protein coding RNAs (miRNAs and lncRNAs) have only recently been recognized—they were long thought to be “junk” because they do not encode proteins. Today, researchers know that these RNAs have important regulatory functions, and are leveraging the knowledge to develop new ways to tackle diseases such as cancer, autoimmune conditions, viral infections, and neurodegeneration.

While many investigators are focusing on the amount of specific proteins present in melanoma, tests for these proteins tend to lack specificity and sensitivity. Instead, Perera’s research group is using novel approaches to find microRNAs and lncRNAs whose levels are altered in melanomas. Perera’s laboratory has recently identified the molecular function of two such RNAs, showing that they could contribute to melanoma genesis and progression.

“Understanding the molecular function of these two RNAs provides a rationale for measuring their expression levels in tumor biopsies.” said Perera.

Taking it to the clinic The Perera laboratory is planning to move these discoveries to the clinic by establishing partnerships with commercial diagnostic testing companies. “We expect tests based on RNA markers will yield clear, early results that will ultimately lead to better patient outcomes,” added Perera.