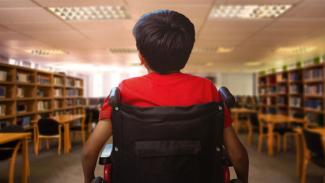 By shedding light on the distinct functions of a protein complex that controls the formation of skeletal muscle tissue, SBP researchers could pave the way for the development of novel therapies for neuromuscular diseases.

Muscular dystrophies are a group of more than 30 genetic diseases characterized by progressive weakness and degeneration of the skeletal muscles that control movement. Some people with the disease will lose the ability to walk, others will have difficulty breathing, but for those stricken with the disease, there is no cure.

“As a medical doctor, my primary goal is to make basic discoveries and translate them into therapeutic interventions,” says Pier Lorenzo Puri, M.D., professor in the Development, Aging, and Regeneration Program at SBP. “Understanding how the genes that regulate muscle stem cells work might reveal specific targets for novel interventions toward countering disease progression in muscular dystrophies.”

In muscular dystrophies, progressive degeneration overwhelms the regenerative capacity of muscle tissue, suggesting that drugs targeting muscle stem (satellite) cell behavior and the molecular steps of skeletal muscle formation could form the basis of successful therapies. But because the precise molecular mechanisms underlying muscle degeneration and regeneration remain unclear, there is no specific treatment to stop or reverse any form of muscular dystrophy.

Puri’s research team recently made substantial strides toward this goal by elucidating the function of a key protein complex called SWI/SNF, which regulates the activity of muscle genes during the formation of skeletal muscle tissue. The findings, published in EMBO Reports, demonstrate that Brm and Brg1— the two alternative catalytic subunits of the SWI/SNF protein complex—play distinct roles in controlling cell proliferation and differentiation during different stages of skeletal muscle formation.

One promising strategy for muscle regeneration in patients with muscular dystrophies relies on drugs that target satellite cells. These drugs, called epigenetic drugs, make genes for needed proteins more accessible to the cell machinery that transcribes their genetic code. Puri’s research has already led to ongoing clinical trials of epigenetic drugs called histone deacetylase inhibitors (HDACis). The drugs are being tested in boys with muscular dystrophy. Males are more likely to be stricken with the disease, and more than 90% will need to use wheelchairs by the age of 24.

The SWI/SNF chromatin-remodeling complex controls the activity of muscle genes during the formation of skeletal muscle tissue by modifying the structure of DNA-protein complexes called chromatin, which is loosely packaged when genes are turned on and tightly packaged when genes are turned off. The Brm and Brg1 subunits of the SWI/SNF complex have been shown to play similar roles in controlling the activity of genes involved in cell proliferation, differentiation, and the formation of muscle tissue. But the SWI/SNF complex varies in its composition, and the Brm and Brg1 subunits are never found in the same SWI/SNF complex, suggesting that they have different effects on various cellular processes.

Moreover, genetically engineered mice that lacked Brm displayed impaired muscle regeneration after injury, with aberrant proliferation of satellite cells and delayed formation of new muscle fibers. This finding demonstrates that Brm is required for proper muscle regeneration, as its absence affects the balance between proliferation and differentiation of muscle stem cells.

In future studies, Puri and his team will examine whether differences in SWI/SNF composition can also contribute to the distinct activities of Brg1 and Brm during the formation of skeletal muscle tissue.

“We are continuing dissecting the molecular network that regulates muscle regeneration by progressively moving our analysis toward patient-derived cells,” Puri said. “This research may ultimately lead to the development of new drugs or strategies that can reverse or slow the progression of muscular dystrophies.”

This post was written by Janelle Weaver, a freelance science writer