Why new therapies are failing some kids with brain cancer 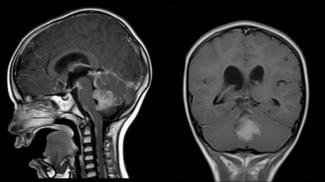 The most common type of malignant brain cancer in children is medulloblastoma, a fast growing tumor located in the cerebellum—the lower, rear portion of the brain. Although the standard treatment, an aggressive combination of surgery, radiation, and high-dose chemotherapy, cures more than 70 percent of patients, many survivors are left with profound long-term side effects, including cognitive deficits and increased incidence of other cancers.

Targeted therapy is a new type of cancer treatment that aims to be less toxic than standard therapy by more precisely identifying and attacking cancer cells while doing minimal damage to normal cells. For medulloblastoma patients, targeted therapy may minimize the side effects of treatment and improve overall survival.

In a new international collaborative study published in the journal Nature, researchers have learned why so many targeted drugs for medulloblastoma fail in clinical trials.

“This new research provides an explanation for why most clinical trials fail, and proposes a new approach to improve the success of medulloblastoma therapy,” said Robert Wechsler-Reya, Ph.D, director of the Tumor Initiation and Maintenance Program at SBP and one of the study authors.

“Almost all clinical studies to evaluate novel targeted therapies are performed on patients with recurrent disease—where the tumor has returned after conventional therapy has failed to provide a long term cure. The problem is that the targets of these novel drugs were ‘discovered’ in tumors that had not been exposed to treatment (naïve tumors).

“It turns out that pre-therapy and post-therapy tumors are biologically and genetically different. A targeted drug developed based on the biology of naïve tumors is unlikely to work on a recurrent tumor because the tumor has changed—tumor cells expressing the target are present in dramatically reduced numbers, or even absent.”

The study, directed by neurosurgeon Michael Taylor, M.D., Ph.D., of The Hospital for Sick Children and the University of Toronto, used both human biopsies and murine models of disease to show that the dominant tumor cell type (clone) at recurrence arises at least in part through clonal selection of a minor population of cells present at the time of diagnosis.

Clonal selection is a process where a tumor cell that is resistant to initial therapy survives and multiplies in number, eventually becoming a larger proportion of the cells within a tumor.

“If we are going to test drugs on medulloblastoma patients who have relapsed, we need to identify the key drug targets in relapsed tumors. This should vastly improve the chances that these treatments will be effective.”

The full text of the paper is available here.

Images (MRIs of medulloblastoma cases) courtesy of Frank Gaillard and Bruno di Muzio via Radiopaedia. The tumor appears whiter than the surrounding cerebellum.