Without this protein, tuberculosis is powerless 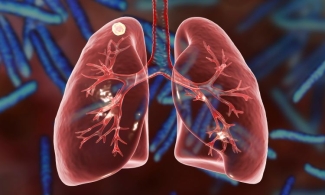 A new study from the lab of Francesca Marassi, Ph.D. could help reveal new treatments for one of the world’s deadliest pathogens.

Sanford Burnham Prebys researchers have uncovered the structure of an important protein for the growth of tuberculosis bacteria. The study, published recently in Nature Communications, sheds light on an unusual metabolic system in tuberculosis, which could help yield new treatments for the disease and help make existing therapies more effective.

“Molecular discoveries like this give us valuable insight into how these bacteria survive, which is important in terms of finding cures for tuberculosis, and for other areas of health and biology,” says James Kent, a Ph.D. candidate working in Marassi’s lab. “For example, bacteria in this family pose problems in both human health and agriculture, such as leprosy and bovine tuberculosis.”

Tuberculosis caused 1.5 million deaths in 2020 according to the World Health Organization, and this figure is expected to increase in the coming years due to the impact of the COVID-19 pandemic.

Stealing iron has its risks
The new protein, called Rv0455c, is part of a complex transportation system in Mycobacterium tuberculosis. Rv0455C helps the bacteria take up iron from the host cells they infect. This process is essential to their growth and replication.

“They produce these very small molecules called siderophores and send them out of the cell, where they bind to iron and bring it back in,” says Kent. “Rv0455C seems to be essential for secreting these molecules.”

An important step of this iron-uptake process is recycling the siderophores so they can be used again. When this process is interrupted, the leftover molecules can accumulate and poison the cell.

And while this delicate system can be interrupted by blocking previously known genes, eliminating Rv0455c does it much more efficiently.

“This seems to be the first piece of evidence that there is a single protein in this system that could be targeted by a new class of tuberculosis drugs,” adds Kent.

Structure determines function
Kent’s role in the study was to piece together the structure of the protein, which had posed a significant challenge to the researchers. Revealing the detailed structure of a protein is a critical part of understanding its function.

“The process of figuring out the structure of a protein can be time consuming and requires precise optimization of many conditions,” says Kent. “This protein is small, but it is still a three-dimensional object moving in three-dimensional space, and the way it's shaped will affect what it does.”

Kent determined that the Rv0455c protein has an unusual “cinched” structure that could help explain its unique function in tuberculosis bacteria. The structure may also help determine whether it’s possible to target the protein with therapeutics.

Looking ahead
The findings suggest that targeting the recycling of iron-carrying molecules may lead to the development of much-needed drugs to combat one of the world’s deadliest bacterial pathogens.

Kent is also optimistic that the findings could help augment existing treatments for tuberculosis.

“Because treatment cycles are long for tuberculosis, a common problem with is multi-drug resistance,” says Kent. “There’s a very good possibility that there will be implications for this protein in interrupting some of the processes that lead to bacterial resistance.”