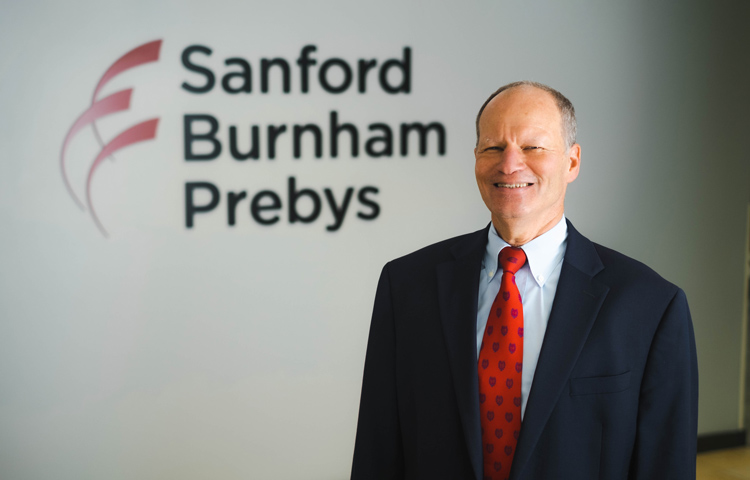 The Board of Directors of Sanford Burnham Prebys is pleased to announce the appointment of David Brenner, M.D., as the Institute’s next president and chief executive officer.

“Our Board is thrilled to introduce a leader of David’s caliber,” says James C. Blair, chairman of Sanford Burnham Prebys’ Board of Trustees. “David is a highly respected physician-scientist with tremendous administrative and fundraising experience. He is the ideal candidate to grow the Institute into an even greater, more successful scientific enterprise dedicated to research that can improve human health.”

At UC San Diego, Brenner guided the nearly $2 billion expansion of health sciences that included the opening of the Jacobs Medical Center and the Altman Clinical and Translational Research Institute, where scientists try to speed research discoveries into new drugs and therapies. He also led the development of the Herbert Wertheim School of Public Health and Human Longevity Science, centered on justice, equity, diversity and inclusion in its approach to public health research, education and service.

“I could not be more grateful to accept the position of president/CEO at this world-class biomedical research institute,” says Brenner. “My roots are in biomedical research, and it’s an honor to be selected to lead Sanford Burnham Prebys’ extremely talented, innovative researchers.”

Brenner is a leader in the field of liver research and is widely respected for his work advancing laboratory discoveries to the clinic setting. At Sanford Burnham Prebys, he will continue his research on fibrotic liver disease and liver cancer, using this as the foundation for preventing and treating liver disease. Brenner is a former editor-in-chief of Gastroenterology, the premier journal in the field.

“I’ve known about Sanford Burnham Prebys for many years—it has so much to offer. The culture of encouraging scientists to pursue opportunities and collaborating with institutions in San Diego and beyond leads to breakthrough research and makes it possible to achieve incredible goals,” adds Brenner.

Brenner earned his M.D. from the Yale University School of Medicine. He was chief of Gastroenterology at the University of North Carolina and Chair of Medicine at Columbia University, before joining UC San Diego in 2007. His professional memberships include the National Academy of Medicine, the American Society for Clinical Investigation, the Association of American Physicians (of which he is a past president), and an NIH National Council. At UC San Diego, he led the unprecedented expansion of the medical school. He has also served as a Pew Scholar and as a Clinical Investigator in the Veteran Affairs system.

Brenner succeeds Kristiina Vuori, M.D., Ph.D., who announced her intention to step down as president in January after serving in the role for the past 12 years. Vuori will continue as professor at the Sanford Burnham Prebys NCI-designated Cancer Center.  Brenner is assuming the role of CEO from C. Randal Mills, Ph.D., who left the Institute earlier this year.