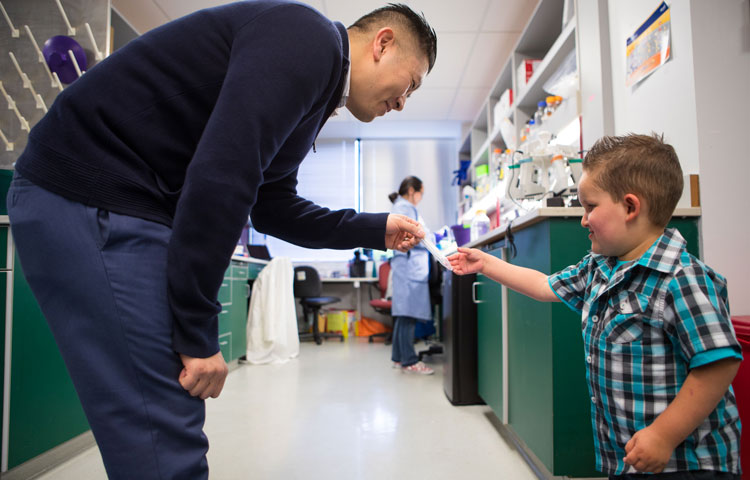 Research led by Associate Professor Duc Dong, Ph.D., has shown for the first time that the effects of Alagille syndrome, an incurable genetic disorder that affects the liver, could be reversed with a single drug. The study, published in the Proceedings of the National Academy of Sciences, has the potential to transform treatment for this rare disease and may also have implications for more common diseases.

“Alagille syndrome is widely considered an incurable disease, but we believe we’re on the way to changing that,” says Dong, who is also the associate dean of admissions for Sanford Burnham Prebys’ graduate school. “We aim to advance this drug into clinical trials, and our results demonstrate its effectiveness for the first time.”

“Duc and his team continue to do thrilling research on Alagille syndrome, and these breakthroughs certainly offer hope for families living with this very complicated and complex disorder,” says Roberta Smith, CNMT, president of the Alagille Syndrome Alliance. “We have been longtime supporters of Duc's work and have come to know him as a driven, dedicated scientist who is passionate about moving the needle one step closer toward a cure.”

Their new drug, called NoRA1, activates the Notch pathway, a cell-to-cell signaling system present in nearly all animals. Notch signaling helps orchestrate fundamental biological processes and plays a role in many diseases in addition to Alagille syndrome. In children with Alagille syndrome, a genetic mutation causes a reduction in Notch signaling, which results in poor liver duct growth and regeneration.

The researchers found that in animals with mutations in the same gene affected in Alagille syndrome, NoRA1 increases Notch signaling and triggers duct cells to regenerate and repopulate in the liver, reversing liver damage and increasing survival.

“The liver is well known for its great capacity to regenerate, but this doesn’t happen in most children with Alagille syndrome because of compromised Notch signaling,” says first author Chengjian Zhao, a postdoctoral researcher in Dong’s lab. “Our research suggests that nudging the Notch pathway up with a drug could be enough to restore the liver’s normal regenerative potential.”

The researchers are currently testing the drug on miniature livers cultured in the lab with stem cells derived from the cells of Alagille patients.

“Instead of forcing the cells to do something unusual, we are just encouraging a natural regenerative process to occur, so I’m optimistic that this will be an effective therapeutic for Alagille syndrome,” adds Dong.

Dong is also taking steps to form a start-up company to drive this drug toward clinical trials. The new company will initially focus on Alagille syndrome, but also plans to develop this drug for other, more prevalent diseases, including certain cancers.