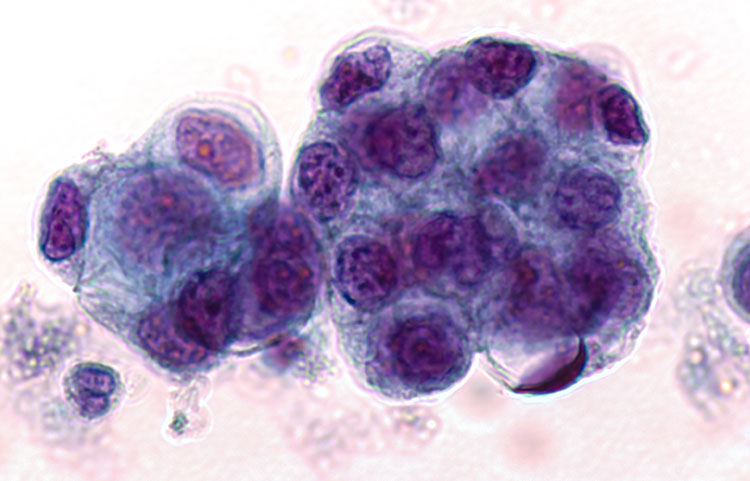 Scientists at Sanford Burnham Prebys Medical Discovery Institute have shown that pancreatic cancer metastasis—when tumor cells gain the ability to migrate to new parts of the body—can be suppressed by inhibiting a protein called Slug that regulates cell movement. The study, published in the Journal of Experimental Medicine, also revealed two druggable targets that interact with Slug and hold promise as treatments that may stop the spread of pancreatic cancer.

“Pancreatic cancer cells are notorious for their ability to escape from a tumor. Even when pancreatic cancer is caught early, tumor cells are often already found circulating throughout the body,” says Cosimo Commisso, Ph.D., associate professor in Sanford Burnham Prebys’ NCI-designated Cancer Center and senior study author. “Our study suggests that we may be able to create treatments that stop pancreatic cancer cells from untethering in the first place, which could reduce metastasis and help more people survive this deadly cancer.”

Pancreatic cancer cells grow rapidly and quickly deplete the nutrients in their environment. To meet their energy needs, tumor cells boost metabolic pathways that normal cells don’t use. Commisso is working to understand how pancreatic cancer cells respond to nutrient deprivation—focusing on the most commonly depleted nutrient, glutamine—with the goal of finding treatments that stop the growth of cancer cells without harming healthy cells.

In the study, the scientists used a mouse model of pancreatic cancer to show that, in response to glutamine deficiency, a protein called Slug drives metastasis by activating the epithelial-mesenchymal transition, or EMT—the process cells use to free themselves from tightly packed tissue. Inhibiting Slug reduced the cancer’s ability to spread—demonstrated by a reduction in the number and size of secondary lung tumors. The scientists also established that patient samples with higher levels of Slug were linked to a poor prognosis—further indicating that blocking the protein may be beneficial.

“The field of pancreatic cancer research is still working to understand the role of EMT in metastasis. Our study shows that glutamine deficiency indeed activates EMT, through Slug, to allow pancreatic cancer cells to escape and look for nutrient-rich grounds,” says Maria Victoria Recouvreux, Ph.D., a staff scientist in the Commisso lab at Sanford Burnham Prebys and the first author of the study. “In addition to revealing new therapeutic avenues that may halt pancreatic cancer metastasis, these findings might also apply to other tumors that rapidly consume glutamine, including lung and colon cancers.”

Because Slug is considered “undruggable” due to inherent biological properties, the scientists continued to search for proteins that interact with Slug and could be targeted with a drug. Their research identified two promising targets: ERK and eIF2 alpha. ERK inhibitors are currently under evaluation in clinical trials for pancreatic and other cancers, and an eIF2 alpha inhibitor has shown promise in an animal model of prostate cancer.

New hope for a deadly cancer

Once pancreatic cancer metastasizes, the number of people who are alive five years later drops from 37% to only 3%. Of the 57,000 Americans expected to be diagnosed with pancreatic cancer in 2020, about 10% are diagnosed at an early stage and may benefit from a drug that prevents metastasis. For unknown reasons, pancreatic cancer is on the rise and predicted to become the second-leading cause of cancer-related deaths in the U.S. by 2030.

Now that the researchers have established the important role of Slug in driving metastatic pancreatic cancer, they plan to expand their research to determine Slug’s role in pancreatic cancer overall, including its impact on disease aggressiveness and survival.

“To make progress in the fight against pancreatic cancer, it is critical that we have a strong scientific understanding of what is driving the tumor’s growth and metastasis,” says Lynn Matrisian, Ph.D., chief science officer at the Pancreatic Cancer Action Network (PanCAN), who wasn’t involved in the study. “Today’s findings reveal new insights into how pancreatic cancer metastasizes, providing both hope and important new directions for research that might be able to help more people survive the world’s toughest cancer.”

Get an in-depth look at pancreatic cancer by watching our recent Insights discussion, featuring a scientist, a doctor and a pancreatic cancer survivor. (presentation starts at approx. seven minutes into the video)

Research reported in this press release was supported by the National Institutes of Health (NIH) (R01CA207189 and P30CA030199).