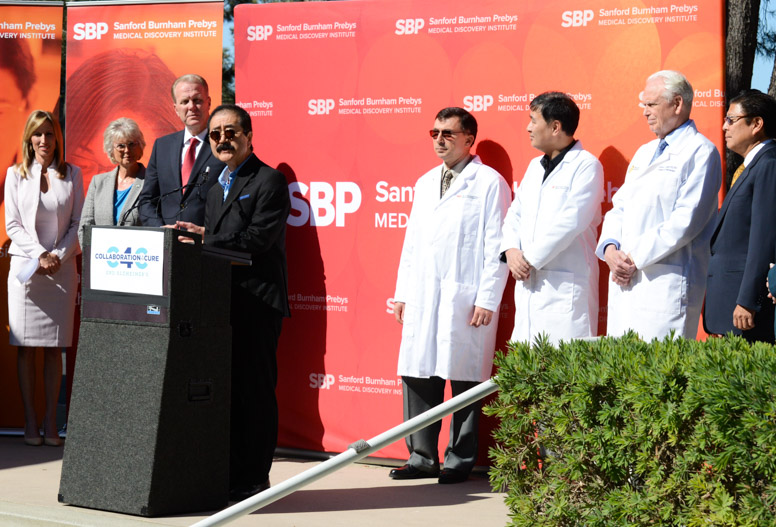 San Diego, Calif., April 20, 2018 - San Diego’s fight to end Alzheimer’s disease got a big boost today amid signs that the deadly illness and other forms of dementia are taking an escalating toll on the region.

A coalition of brain scientists and civic leaders, including Mayor Kevin Faulconer and county Supervisors Dianne Jacob and Kristin Gaspar, announced that the federal government has awarded a $1.3 million grant to Sanford Burnham Prebys Medical Discovery Institute to advance the local search for a cure.

“Alzheimer’s disease is taking a brutal and growing toll on San Diegans and we must step up the fight to end this epidemic,” said Supervisor Jacob. “The grant is a milestone and a huge vote of confidence in our efforts, but we face a tough road ahead as our senior population soars.”

Today’s news grow out of the work of The Alzheimer’s Project, a county-led initiative that has gained national recognition, and its spinoff, Collaboration4Cure. C4C has brought together the region’s top research institutions with Alzheimer’s San Diego to expand the drive to find a treatment or cure.

“Alzheimer’s disease personally affects tens of thousands of residents, families and caregivers in San Diego every day, which is why this grant is so significant,” San Diego Mayor Kevin Faulconer said. “This funding is critical to advancing research and providing programs that will support people as they overcome this debilitating disease. It is going to help turn San Diego’s culture of scientific collaboration into a cure.”

Sanford Burnham Prebys (SBP) announced that a team of scientists has been awarded a three-year National Institutes of Health (NIH) grant to identify prototype drugs with the long-term goal of developing a disease-modifying treatment for Alzheimer’s disease.

The $1.3 million grant stems from a collaborative effort between Drs. Huaxi Xu, Michael Jackson and Eduard Sergienko, who have been working for the past two years on research funded by C4C and a grant from Stuart and Karen Tanz. The studies focus on a gene called TREM2, mutations of which are known to correlate with a significantly increased risk of developing late-onset Alzheimer’s.

With this NIH grant, the SBP team plans to identify prototype drugs that can bind to and modulate the activity of TREM2. The identified chemical compounds will be tested in cellular systems, to provide insight into the biology of TREM2 and its role in late-onset Alzheimer’s and to advance the long-term goal of developing a disease-modifying treatment.

“Alzheimer’s disease represents a huge unmet patient need,” said Kristiina Vuori, M.D., Ph.D., president of Sanford Burnham Prebys Medical Discovery Institute. “There are no known cures and no disease modifying therapies ― yet. We are committed to help change that.”

Participating with Sanford Burnham Prebys in C4C are The Salk Institute, The Scripps Research Institute, J. Craig Venter Institute and the University of California, San Diego.

In 2015, San Diego philanthropist Darlene Shiley provided the seed money to start the research incubator and remains its lead donor. Those wishing to contribute can go to alzsd.org/c4c.

The county’s Health and Human Services Agency produced the two studies released today. While Alzheimer’s is the sixth-leading cause of death in the United States, it is the third-leading cause in San Diego County.

One of the reports, “The Economic Burden of Alzheimer’s Disease and Related Dementias in San Diego County,” says the lifetime cost of care for local residents with the dementia exceeds $38 billion. That figure is expected to balloon to more than $52 billion by 2030.

The second study, “Alzheimer’s Disease and Related Dementias in San Diego County,” estimates that the number of family members and other caregivers needed to help San Diegans with dementia will grow to nearly 300,000 by 2030 from 214,000 today.

"We see the devastation caused by Alzheimer's every single day – from the person who was recently diagnosed and doesn't know where to turn, to exhausted family caregivers in need of guidance and everyone in between," said Eugenia Welch, president and CEO of Alzheimer's San Diego. "Alzheimer's San Diego will be here working tirelessly for local families impacted by dementia until the day a cure is found. Thanks to C4C, we're closer to that day than ever before."

Supervisor Jacob spearheaded the creation of The Alzheimer’s Project in 2014, with the backing of the county Board of Supervisors.

Since its launch, the project has created the region’s first standards for the diagnosis and management of dementia and boosted training for nurses and others who will work with patients.

It has joined with the Sheriff’s Department to tighten the safety net for seniors at risk of wandering and created a pilot program to help those with dementia who find themselves in emergency situations.

“I am so proud of those in our community who put in countless hours of their time to care for someone with Alzheimer’s or dementia,” said Kristin Gaspar, chairwoman of the county Board of Supervisors. “This disease has a profound impact on our families, our healthcare system, and our entire community. These funds will ensure we move closer to finding a cure and improve the lives of everyone touched by Alzheimer’s and other dementias.”