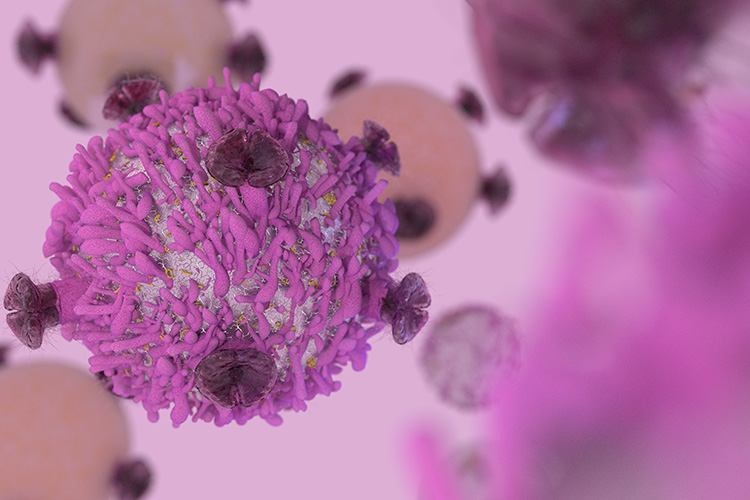 Scientists at Sanford Burnham Prebys have discovered that combining immunotherapy with a drug called tumor necrosis factor (TNF) eradicated a deadly type of pediatric brain tumor in mice. The discovery, published in Nature Neuroscience, is expected to lead to a clinical trial to test the benefits of the treatment in patients. The findings also hold implications for other cancers that do not respond to immunotherapy.

“I’ve studied medulloblastoma for more than 20 years. I’ve seen many therapies that prolong survival in mice. But this is the first time I have ever seen a therapy essentially melt the tumor away,” says Robert Wechsler-Reya, Ph.D., senior author of the paper, professor and director of the Tumor Initiation and Maintenance Program at Sanford Burnham Prebys, and program director of the Joseph Clayes III Research Center for Neuro-Oncology and Genomics at the Rady Children’s Institute for Genomic Medicine. “We look forward to testing this approach in the clinic and are hopeful that this discovery might be able to save children’s lives.”

One in four children does not survive medulloblastoma, and tumors with mutations in p53, a protein that stops the growth of tumors, are especially deadly. The standard treatments for the disease are surgery, whole brain and spine radiation, and intensive chemotherapy. Although these aggressive treatments can cure some patients, those who survive often suffer devastating long-term side effects, including intellectual disabilities, hormonal disorders and an increased risk of developing cancer later in life. Scientists have been striving to use immunotherapy, which harnesses an individual’s immune system to destroy the cancer, as a safer and more effective treatment for medulloblastoma.

“We are very encouraged by these study results and hope to initiate a Phase 1 clinical trial as soon as possible,” says Sabine Mueller, M.D., Ph.D., co-founder of the Pediatric Pacific Neuro-Oncology Consortium (PNOC), a network of children’s hospitals that aims to advance personalized therapies to children and young adults with brain tumors. “Undergoing chemotherapy and radiation is difficult for adults, and even more so for children. Treatment advances cannot come soon enough for these vulnerable pediatric patients.”

In the study, Wechsler-Reya and his colleagues conducted a series of experiments investigating why immune responses differed between two different mouse models of medulloblastoma—one with p53 mutations and one without. Often called the “guardian of the genome,” p53 scans DNA for errors and is the most frequently mutated gene in human cancer.

These experiments revealed that tumors lacking p53 do not display an important protein—called the major histocompatibility complex I (MHC-I)—on their surface. MHC-I allows tumors to be recognized and killed by the immune system; without it, a tumor is invisible to the immune system and continues to grow uninterrupted.

The scientists found that low doses of TNF increased expression of MHC-I on p53-mutant tumors—removing their “invisibility cloak” and allowing them to be detected and destroyed by the immune system. Importantly, when mice with p53-mutant tumors received both TNF and a type of immunotherapy called an immune checkpoint inhibitor, the tumor completely disappeared.

“This work suggests that adding TNF to immunotherapy could benefit medulloblastoma patients with tumors lacking p53,” says Alexandra Garancher, Ph.D., first author of the study and a postdoctoral associate in the Wechsler-Reya lab. “If p53 is missing, low doses of TNF may boost MHC-I to the levels needed for immunotherapy to work.”

The scientists also tested the combination treatment in a mouse model of diffuse intrinsic pontine glioma (DIPG), a deadly pediatric brain tumor that has a nearly 100% fatality rate. After receiving the treatment, approximately half of these mice survived the cancer.

“Our findings suggest that some cancers may not respond to immunotherapy because the tumors don’t have sufficient MHC-I levels to trigger an effective immune response,” says Wechsler-Reya. “Our hope is that in the near term, combining immunotherapy with TNF will increase the effectiveness of immunotherapy for children who are battling brain cancer.”