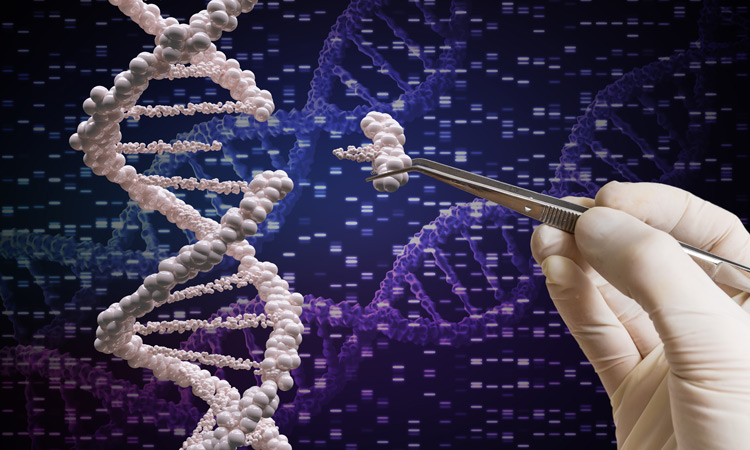 Some gene edits may favor cells with cancer-linked mutations.

A comprehensive study—conducted by researchers at Sanford Burnham Prebys, the National Cancer Institute (NCI) and other groups—has shown that gene editing, specifically gene knockout (KO), with CRISPR -Cas9 can favor cells with mutated forms of genes linked to cancer. The findings highlight the need to monitor patients undergoing CRISPR-Cas9-based gene therapy for cancer-related mutations. The study was published in the journal Nature Communications.

“Our study shows that in many different cell types, CRISPR gene-editing can confer a selective advantage to cells harboring mutations in genes associated with cancer, such as p53 and KRAS,” says co-senior author Ani Deshpande, Ph.D., an assistant professor in the NCI-Designated Cancer Center at Sanford Burnham Prebys. “We have shown that when CRISPR-Cas9 is used to edit the genome, cells with cancer-associated mutations are likely to be selected to survive —and this is more widespread than scientists previously understood.”

CRISPR-Cas9 works by creating double-stranded DNA breaks at specific points in a DNA sequence, allowing scientists to target and edit specific genes. However, the p53 gene responds to double-stranded breaks by arresting cell growth, meaning that cells that have undergone CRISPR would grow and divide less effectively. This means that cells with mutations in the p53 gene can continue to grow and divide normally, giving them a competitive advantage.

The p53 gene stops cell division if a genomic error arises and attempts to correct the problem. If the error cannot be fixed, p53 will initiate programmed cell death before the cells can become cancerous. This makes p53 a critical anti-cancer gene and losing its function can make people more susceptible to tumors.

“The p53 gene is so important that it’s actually nicknamed the ‘guardian of the genome,’” says Deshpande.

Computational biologists led by Eytan Ruppin, Ph.D., chief of the Cancer Data Science Laboratory at the NCI Center for Cancer Research and co-leader of the study, analyzed p53 responses to double-stranded breaks in nearly 1,000 human cell lines. In almost every cell type, they found that after CRISPR-Cas9 KO, cells with normal p53 genes exhibited slower growth, while those with mutated p53 genes were less affected, allowing them to grow faster and outcompete the normal cells. They also found that CRISPR may confer an advantage to cells with other cancer-associated mutations, like those of the KRAS oncogene.

“This is not the first time researchers have shown CRISPR may introduce potentially dangerous changes,” says Ruppin, “However, it is the first time these effects have been demonstrated in so many diverse cells.

The findings point to a need for caution in the use of CRISPR-based gene therapies, particularly when treating individuals with underlying mutations in p53 or KRAS genes.“There are CRISPR therapies being developed to correct mutations in many human tissues, but as others have noted before, we need to proceed with caution, because we may be selecting for cells that carry mutations in key cancer driver genes when using CRISPR-Cas9 editing, and that could be potentially dangerous. However, fortunately and importantly, additional new CRISPR editing techniques that have been recently developed are much less likely to carry this risk, if at all,” adds Ruppin.

“Early CRISPR techniques generated double-stranded breaks, but more modern iterations make simpler edits to target DNA,” says Deshpande. “If we use a non-cutting version of CRISPR we are likely to avoid many of these problems, which could be very good news for patients.”

Despite the potential risks, the authors believe that CRISPR remains an exciting and revolutionary approach and that barriers like this are not insurmountable. Both senior authors note that promising medical technologies must often overcome hurdles before they are safe enough to be used in patients.