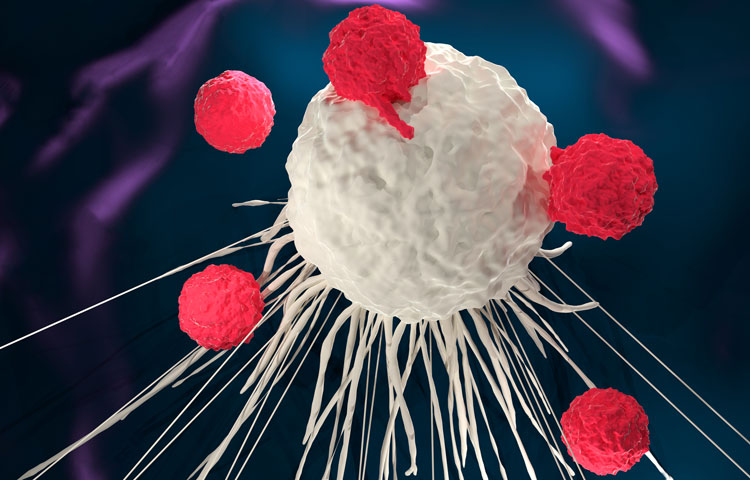 Scientists have identified a new way to boost the immune system’s ability to fight cancer.

Scientists at Sanford Burnham Prebys Medical Discovery Institute have identified a new way to boost the immune system’s ability to fight cancer. The study, which was performed in collaboration with NYU Langone’s Perlmutter Cancer Center, used a mouse model to identify the importance of the Siah2 protein in the control of immune cells called T regulatory cells (Tregs), which limit the effectiveness of currently used immunotherapies. The research, which offers a new avenue to pursue immunotherapy in cases where the treatment fails, was published today in Nature Communications.

“While Siah2 is involved in control of activities that govern cancer development, this study offers the first direct evidence for its role in the immune system, namely in anti-tumor immunity,” says Ze’ev Ronai, Ph.D., professor in Sanford Burnham Prebys’ Tumor Initiation and Maintenance Program and senior author of the study. “Our study shows that a PD-1 inhibitor can be used to treat tumors that currently do not respond to this therapy, when administered in mice lacking the Siah2 gene, thereby offering a means to expand the effectiveness of immunotherapy. The findings also provide further justification for our efforts to find a drug that blocks Siah2.”

The development of cancer immunotherapies, which harness the power of an individual’s immune system to destroy tumors, has revolutionized the treatment of certain cancers. For some people with advanced melanoma, a deadly skin cancer, the treatment has extended survival to years instead of months. However, the treatment only works for about 40% of people with advanced melanoma. The study from the Ronai lab offers a new means to make this treatment effective in individuals who at present do not respond to anti-PD-1 therapy.

Ronai explains, “In our study, mice lacking the Siah2 gene were able to mount an immune attack against melanoma. Moreover, the effectiveness of Siah2 in immunotherapy was demonstrated for ‘cold’ tumors—those that do not respond to immunotherapy—which were effectively eliminated by a PD-1 blockade in Siah2-mutant mice.”

“Understanding the basic mechanisms of tumor immunity will ultimately help us improve the effectiveness of immunotherapy,” says Michael Rape, Ph.D., Howard Hughes Investigator and professor of Cell and Developmental Biology at University of California, Berkeley. “This study uncovers an important layer in the regulation of key immune cell components that impact the effectiveness of cancer immunotherapy, highlighting the need to develop inhibitors for Tregs, in which a Siah2 inhibitor holds promise.”

Scientists have known for many years that Siah2 is involved in cellular responses to hypoxia (low oxygen) and the unfolded protein response—two processes that are exploited by tumors to keep growing. Ronai has studied the protein for nearly a decade in hopes of finding better cancer treatments: His team is currently working to develop a small molecule drug that blocks the protein. Now, Ronai’s study shows that the protein also plays an important role in regulating the immune system’s response to a tumor.

In the study, the scientists used genetically engineered mice that did not produce the Siah2 protein and then introduced BRAF-mutant melanoma—a mutation that occurs in about half of human melanomas. This approach allowed the researchers to study the role of Siah2 in the tumor’s microenvironment, of which the immune system is a major component. In the absence of the Siah2 gene, the melanoma tumors receded—a stark contrast to mice with the Siah2 gene, in which the tumor continued to grow. Giving these mice anti-PD-1 therapy effectively eliminated melanoma that otherwise resisted this therapy, demonstrating a new path to enhance the effectiveness of current immunotherapies.

Digging deeper into their findings, the scientists discovered that in the Siah2 mutant mice, the tumors were infiltrated by killer but not Treg immune cells—indicating the immune system was more active in clearing the tumors. The lack of the Treg cells was attributed to reduced proliferation and recruitment into the tumor due to the role of Siah2 and its control of cell cycle regulatory proteins.

“Our discovery only fuels our sense of urgency to find a drug that inhibits Siah2,” says Ronai. “Using an arsenal of novel approaches should enable us to advance the targeting of Siah2 in both the tumors and their microenvironment.”