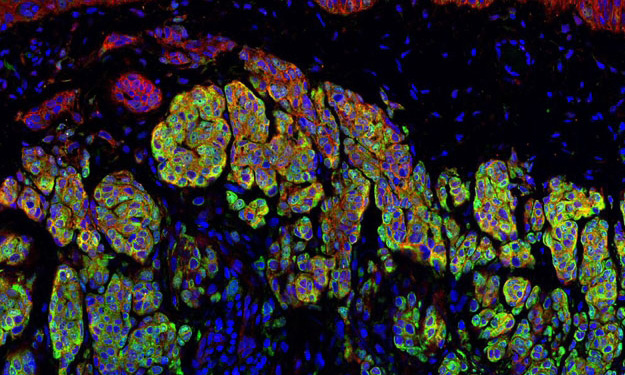 With the help of two new grants from the National Institutes of Health totaling more than $4.4 million, Sanford Burnham Prebys Assistant Professor Charles Spruck, Ph.D., and his team are refining a cutting-edge breast cancer treatment. The new approach, known as viral mimicry, tricks the body into thinking that it has a viral infection, stimulating immune responses that can help the body fight cancer and improve the effects of other treatments.

“Modern cancer treatment relies on using multiple treatment strategies to minimize the risk of resistance, so the beauty here is that while we’ve found that our approach has anti-tumor properties when used alone, it also has the potential to work synergistically with other treatments,” says Spruck. “Fortunately, it is cancer-specific, so unlike chemotherapy, this treatment won’t harm healthy cells, thus also limiting adverse side effects.”

Because ER+ tumors rely on hormones to grow, they can be inhibited with anti-hormone therapies, which are much less toxic than standard chemotherapy. Early-stage ER+ breast cancer is usually responsive to treatment, but a significant proportion of patients go on to have a relapse when the cancer returns, often traveling to other areas of the body. These relapses tend to be much more treatment resistant and often occur many years after the initial cancer is gone.

“For survivors, there’s always the risk of a relapse that could resist treatment and eventually kill them,” says Spruck. “That’s a terrifying prospect to live with, especially if you’re otherwise healthy and cancer-free. That’s why we need to develop better, less toxic treatments.”

Useful viruses are in our genome
The new approach takes advantage of a bizarre evolutionary feature of our genome called endogenous retroviruses (ERVs). These are small, repeated sections in our genome that were left behind by viruses infecting our ancient ancestors. Unlike regular viruses, ERVs do not make us sick. Instead, they help control gene expression by moving around and inserting themselves into different locations in our genome.

ERVs don’t make us sick because they are usually silent, meaning that the proteins they encode are not expressed in the body. However, researchers have found that it’s possible to reactivate these fragments in cancer cells and fool the body into mounting an immune response.

“The body thinks there’s an infection, which kicks the immune system into high gear,” says Spruck. “This makes cancer cells more receptive to immunotherapy and can slow tumor growth, but without the harsh side effects of chemotherapy.”

Bringing viral mimicry to the clinic
With the new grants, the team will more fully explore how viral mimicry can be used to fight ER+ breast cancer. The team is also working on converting its approach, which has only been studied in a lab setting, into a drug that can be administered in the clinic.

“We’re still a few years out from using this in the clinic, but we’ve seen that it works in the lab, and once it does make it into the clinic, it’s going to be safer and less toxic than current treatment options,” adds Spruck.

The researchers are also confident that the method will be applicable to other cancers beyond ER+ breast cancer.

“We discovered the pathway in breast cancer, but the fact remains that with a few exceptions, the majority of tumors are cold for most cancers,” says Spruck. “We’re not just improving breast cancer treatment, we’re opening a door to a new way of approaching cancer.”