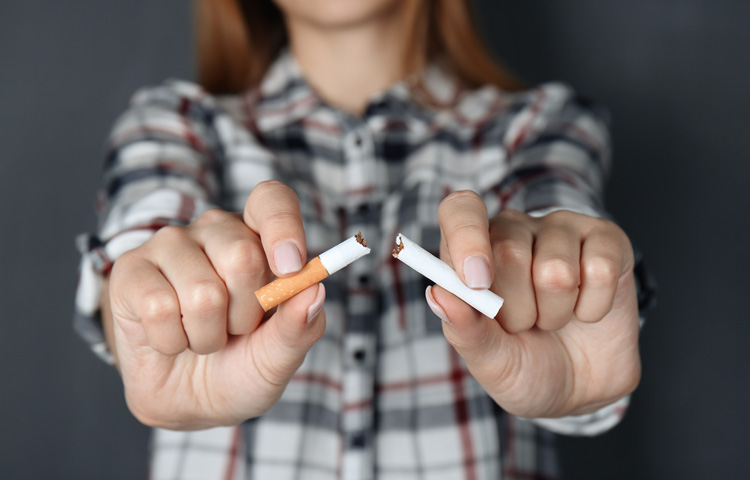 Scientists at Sanford Burnham Prebys Medical Discovery Institute, Camino Pharma, LLC and University of California San Diego School of Medicine have been awarded an $11.4 million grant from the National Institute on Drug Abuse (NIDA) at the National Institutes of Health (NIH) to advance a novel drug candidate for nicotine addiction into first-in-human Phase 1 studies. The drug targets a neuronal signaling pathway underlying addictive behaviors, and would be a first-in-class medication to help people quit smoking.

“Smoking continues to be a major public health threat and there is a great need for new and effective smoking-cessation treatments. Existing FDA-approved therapies for nicotine addiction work less than 30% of the time in the long term, and it is common to relapse after quitting,” says principal investigator Nicholas Cosford, Ph.D., deputy director of Sanford Burnham Prebys’ National Cancer Institute (NCI)-designated Cancer Center and co-founder of Camino Pharma. “We are optimistic that our drug, SBP-9330, will help more people quit smoking for good—and we may be able to broaden the indication to other types of addiction, such as cocaine, opioid or methamphetamine dependency, as we move forward.”

More than one billion people worldwide smoke tobacco, and the advent of electronic cigarettes (e-cigarettes) has caused a sharp increase in young adults who use nicotine—the addictive component of tobacco. Cigarette smoking accounts for approximately 30% of all cancers, including 80% of lung cancer cases, according to the American Cancer Society. Lung cancer remains the number-one cause of cancer deaths in the U.S., and more than half of people die within a year of being diagnosed.

“Incredibly, it has been 14 years since FDA approved the last drug treatment for nicotine addiction,” says principal investigator Gonul Velicelebi, Ph.D., CEO and co-founder of Camino Pharma. “Our drug candidate works through a mechanism distinct from the currently available drugs and is an orally administered compound that may give people who want to quit smoking a safe, effective way to finally kick the habit.”

A new mechanism of action

The three-year grant will fund early clinical development of SBP-9330, a small molecule that was discovered by Cosford and his team at Sanford Burnham Prebys. SBP-9330 targets a receptor called metabotropic glutamate receptor 2 (mGlu2), which leads to reduced levels of glutamate—a neurotransmitter linked to nicotine addiction and relapse behavior.

The NIH funding allows the scientists to initiate and complete a Phase 1 study of SBP-9330 in healthy volunteers. This study will determine the drug’s safety, tolerability and pharmacokinetic profile—which will inform dosing in subsequent studies. Additional studies, including longer-term toxicology, will also be conducted during the grant term to support future Phase 2a efficacy studies.

“This grant advances a potential therapeutic that, if successful, would help millions of people quit smoking and remain abstinent, thereby preventing or mitigating the negative health effects caused by smoking or vaping, including emphysema, cancer and even COVID-19,” says Kristiina Vuori, M.D., Ph.D., president of Sanford Burnham Prebys and Pauline & Stanley Foster Presidential Chair. “I applaud NIDA’s investment in this drug candidate which has the potential to have an enormous positive impact on human health.”

Earlier tests of SBP-9330, which were completed under a previous $10.8 million NIDA grant awarded to the same researchers, demonstrated that the drug candidate reduces nicotine self-administration in animal models and is safe and well tolerated in preclinical studies. Under the terms of the current grant, Sanford Burnham Prebys will complete activities related to drug manufacturing and formulation; Camino Pharma will drive clinical development of the drug candidate; and Robert Anthenelli, M.D., principal investigator and professor of Psychiatry at UC San Diego School of Medicine, will continue to provide expert guidance as a clinical pharmacologist and key opinion leader in the smoking-cessation field.