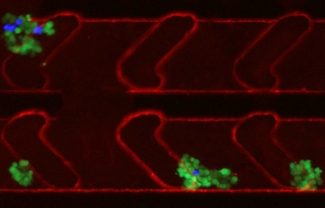 Nearly 90 percent of cancer deaths are a result of metastases, when tumors spread to other vital organs. Researchers are learning that cancer metastases are not due to individual cells but rather distinct clusters of cancer cells that circulate and metastasize to other organs. However, obtaining these clusters to learn more about the metastatic process has proved difficult.

“The reason for such little research activity on cancer clusters is the overwhelming difficulty of capturing these extremely rare samples from a patient’s blood sample,” says Peter Teriete, Ph.D., a study author and a research assistant professor at Sanford Burnham Prebys. “But we realized that if we’re ever going to understand the complex process of cancer metastasis, we’d need to develop a tool to easily find these clusters.”

To do so, the researchers first identified the basic requirements essential to collecting useful information from isolated cancer cell clusters. It involves a sample size large enough to likely contain appreciable numbers of cancer cell clusters (about 10 milliliters of whole blood), as well as using whole blood to preserve rare circulating clusters. Whole blood, however, requires special channel-coating procedures that reduce nonspecific binding properties to prevent biofouling. And the device channel dimensions must be of a suitable size to accommodate single cells and cancer cell clusters of varying diameters.

“Our device’s channel design had to generate microfluidic flow characteristics suitable to facilitate cell capture via antibodies within the coated channels,” Teriete explains. “So we introduced microfeatures—herringbone recesses—to produce the desired functionality. We also developed a unique alginate hydrogel coating that can be readily decorated with antibodies or other biomolecules. By connecting bioengineering with materials science and basic cancer biology, we were able to develop a device and prove that it performs as desired.”

“Drug development that specifically targets distant metastases has been greatly restricted due to the lack of adequate tools that can readily access the metastatic cells responsible for cancer’s dissemination,” says Teriete. “Our microfluidic device will provide cancer researchers with actual human cancer cell clusters so they can begin to understand the critical mechanisms involved with metastasis and develop highly effective drugs that ultimately can save more cancer patients’ lives.”

Story materials courtesy of the American Institute of Physics. Content has been edited for style and length.