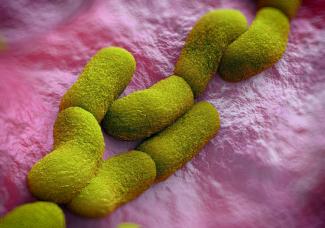 The plague, also known as the Black Death, wiped out a third of Europe’s population in the 14th century and has a long history of exploitation as a biological weapon. Even today, outbreaks of the disease, caused by the bacterium Yersinia pestis, persist in Asia and Africa and the southwestern US.

Bubonic or septicemic plague result when bacteria are transmitted by contact with infected fluid (e.g. a flea bite), spread through the lymphatic system and enter the bloodstream. Both carry very high (40%–60%) mortality. Pneumonic plague results when bacteria are transmitted through aerosolized droplets and colonize the lungs—this form is highly contagious, spreads rapidly and causes extremely high (~100%) mortality.

Although most plague is treatable if detected within hours of infection, the limited number of effective antibiotics, the emergence of antibiotic-resistant strains, the lack of an effective vaccine, and the potential weaponization of aerosolized bacteria with bio-engineered antibiotic resistance all underscore the need to develop medical countermeasures. These factors have led the U.S. Department of Health and Human Services to designate Y. pestis as a Tier 1 Select Agent—the class reserved for pathogens that can be weaponized to kill millions of people.

Finding new defenses against the Y. pestis microbe is important enough that Marassi’s research is being supported by a prestigious five-year grant from the National Institutes of Health.

“We want to determine the architecture of the outer membrane surface of the bacterium because this is the first line of contact with the human host upon infection,” Marassi explains. “We’re studying a protein called Ail (adhesion invasion locus), which is exposed on the bacterial surface and interacts with human proteins in ways that help Y. pestis survive in blood—without Ail, bacterial virulence is highly attenuated.”

Marassi’s lab just made a key advance – developing methods to determine the structure of Ail in the membrane. The results are now published in the Journal of Biomolecular NMR.

“These findings set the stage for studying the interactions of Ail with its protein partners on human host cells,” adds Marassi. “Being able to see the structure of Ail gives us vital insight for the development of drugs to fight the disease.

“Moving forward, we will look at the structural basis of Ail interactions with human host proteins to find sites that interact—that could potentially be interrupted with new drugs.”