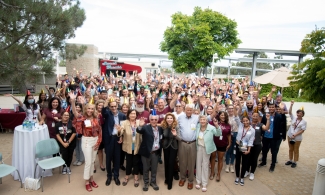 Sanford Burnham Prebys recently hosted a celebration to honor the anniversary of the Institute’s founding. More than 200 scientists, students and staff gathered to commemorate 46 years of world-class biomedical research.

“I’ve seen the Institute grow from just five employees to the more than 500 we have today,” said Institute Professor José Luis Millán, Ph.D., who emceed the event. Millán joined the Institute in 1977, just one year after its founding. “What is important for the Institute now, as we reach middle age, is to reflect on our successes as we move forward into the next decades of our life.”

Burnham recounted how he met the Institute’s two other namesakes, T. Denny Sanford and Conrad Prebys, reflecting on how these chance meetings helped the Institute grow to become the world-class facility it is today. He also expressed his gratitude to the staff.

Decades of discoveries
Sanford Burnham Prebys was founded on July 7, 1976, as the La Jolla Cancer Research Foundation. Since then, the Institute has established itself as a world leader in biomedical research, where scientists can work collaboratively to discover cures.

It all started when founder William Fishman, M.D., Ph.D., left his post as professor, director and founder of the Tufts Cancer Research Center in Boston. He, along with wife and career partner, Lillian Fishman, moved west to San Diego with a $180,000 grant from the National Cancer Institute, which they used to start the La Jolla Cancer Research Foundation.

“[The Fishmans] were dedicated to the idea of pure science,” explains Nina Fishman, daughter of William and Lillian. Nina Fishman is a longtime supporter of Sanford Burnham Prebys, and she recently coauthored Development of a California Research Organization, a book chronicling the Institute’s history. “They wanted a place where scientists could focus on their work.”

At that time, the foundation consisted of five employees, a rented office space, and lab equipment pieced together from spare parts. Today, it is a world-class medical research institute with a graduate school and one of only seven NCI-designated basic cancer centers in the country.