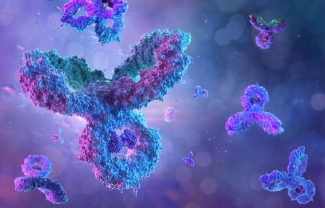 Antibodies are the heroes of our immune system. They protect us from viruses, like SARS-CoV-2 (which can lead to COVID-19), as well as bacteria and other pathogens. They can provide lifelong protection from future infections—if they are strong enough. But, like any hero, they are fallible, and certain cancers or autoimmune disorders can arise when things go wrong.

Now, Sanford Burnham Prebys scientists have revealed that a protein called cyclin D3 tells antibody-producing B cells to start dividing—opening new research avenues that could improve vaccine development or the treatment of B cell lymphoma and autoimmune disorders. The discovery was published in Cell Reports.

Antibodies get their power from a complicated process. When an “intruder” is detected in the body, B cells—which produce antibodies—are activated. Each B cell is unique—they contain slight genetic variations to produce a diverse set of antibodies to attack the “intruder.” Later, they undergo optimization through a “survival of the fittest” process to identify the most protective versions.

“Our findings reveal that cyclin D3 is the ‘go’ signal for B cells to start rapidly dividing and producing a set of diverse antibodies,” says Parham Ramezani-Rad, Ph.D., a postdoctoral researcher in the Tumor Microenvironment and Cancer Immunology Program at Sanford Burnham Prebys and the lead author of the study. “This information might help scientists create better vaccine strategies in the future. On the flip side, researchers may be able to develop better weapons against B cell lymphoma and autoimmune disorders by removing malignant B cells.”

Diving into the “dark zone”

After infection, B cells grow and divide in special structures called germinal centers that form in our spleen and lymph nodes. In this structure, a “dark zone”—referring to what scientists saw under the microscope in the 1930s—and a “light zone” are visible. Now researchers know the dark zone is where B cells are rapidly expanding, and this cell density appeared darker in the original microscope studies. After proliferating in the dark zone, B cells head to the light zone where the best potential antibody options are selected—while less desirable options are eliminated.

Ramezani-Rad made the discovery when studying B cell lymphoma, a blood cancer that often contains a mutation that leads to hyper-stable cyclin D3. Using mice and sophisticated CRISPR gene editing technology, he discovered that cyclin D3 regulates the expansion or contraction of B cells specifically in the dark zone of germinal centers—and not the light zone. He also identified other regulatory aspects involved in this process that scientists might be able to harness for the benefit of human health.

“B cell lymphoma is often treated with an intensive chemo and immunotherapy combination. The side effects of this treatment can be immense, and relapses may occur,” says Ramezani-Rad. “Our findings about cyclin D3 could form the basis for a more tailored medicine that targets exactly what goes wrong during B cell lymphoma, and is potentially less toxic and more effective.”

Ramezani-Rad also designed the image that was selected for the journal cover, which is his artistic impression of the dynamics occurring inside the germinal center. He finds many parallels between scientists and artists.

“As a scientist, I see myself describing what already exists in nature,” explains Ramezani-Rad. “Musicians and painters are also describing the world. They are just using instruments or paint strokes to express emotions, whereas scientists use data to express knowledge.”