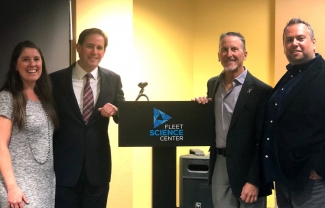 Russell Gold is lucky to be alive. Only 9% of people with pancreatic cancer survive longer than five years—making it one of the deadliest cancers. This January, he will be a six-year survivor.

To help the public better understand what makes pancreatic cancer so lethal—and how we can develop medicines so there are “more of me,” as Gold said—our Institute teamed up with the Fleet Science Center to host a panel discussion on Sunday, November 17. Gold was joined by a clinician and a scientist who both work on pancreatic cancer: Darren Sigal, M.D., of Scripps Health; and Cosimo Commisso, Ph.D., an assistant professor at Sanford Burnham Prebys’ National Cancer Institute (NCI)-designated Cancer Center, respectively.

As the speakers explained, pancreatic cancer is often difficult to diagnose because symptoms—such as pain in the abdomen, yellow skin and eyes, and weight loss—do not typically occur until the disease is advanced. As a result, pancreatic cancer is the 11th most common cancer but the second-leading cause of cancer death. More than 56,000 Americans are expected to receive a pancreatic cancer diagnosis in 2019, according to the American Cancer Society.

Commisso, who was recently named a NextGen Star by the American Association for Cancer Research, is hopeful that his research will lead to effective treatments for pancreatic cancer. Commisso’s research focuses on how rapidly growing pancreatic tumors scavenge nutrients using an alternative supply route, called macropinocytosis. His lab has found that blocking this process, often described as “cellular drinking,” causes pancreatic tumors to shrink—indicating that the approach could lead to tumor-starving drugs.

This event was the fourth of our five-part “Cornering Cancer” series. Register today to join us for a discussion on pediatric brain cancer in December.