Vitamin A deficiency has an outsize impact on gut microbes 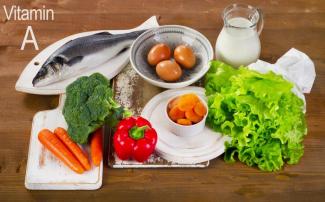 Deficiencies in vitamins and minerals are a major global health threat, affecting two billion people worldwide. Scientists have extensively studied how human biology is affected by imbalances in vitamins and minerals, also known as micronutrients. But much less is known about the effects of micronutrient deficiencies on gut microbes, which also play important roles in human health and disease.

Sanford Burnham Prebys Medical Discovery (SBP) researchers provided an important contribution to a new study, which addressed this gap in knowledge by comparing the effects of deficiencies in vitamin A, folate, iron, and zinc on gut bacteria in mice. As reported May 17th in Science Translational Medicine, vitamin A deficiency had the largest effect on bacterial community structure and gene activity, increasing the abundance of Bacteroides vulgatus, a species previously associated with host growth.

“The current study provides preclinical evidence supporting the concept that the treatment of micronutrient imbalances needs to be considered from the perspective of not only the human host, but also the host’s gut microbiota,” says study co-author Andrei Osterman, Ph.D., a professor at SBP.

Micronutrients enable the body to produce enzymes, hormones and other molecules essential for proper growth and development. The human body doesn’t need a large amount of these substances, but the consequences of their absence are severe. In particular, imbalances in iron, zinc, folate and vitamin A represent a pressing global public health problem, disproportionately affecting children and pregnant women who live in low-income countries.

To examine the effects of iron, zinc, folate and vitamin A deficiencies on gut microbes, Osterman teamed up with senior study author Jeffrey Gordon, M.D, a professor at Washington University School of Medicine. They first colonized mice with a large and diverse community of human gut bacterial strains. Next, they subjected the mice to a diet oscillation, which began with a micronutrient-sufficient diet, followed by a diet that lacked one of the four micronutrients under investigation, followed by a return to the original diet.

By sequencing microbial RNA and DNA in fecal samples, the researchers examined the effect of diet on the bacterial community structure and gene activity. Surprisingly, they found that vitamin A deficiency had the most profound effect, significantly increasing the abundance of B. vulgatus. Repletion of vitamin A in the diet decreased the abundance of this bacterial species, which has been positively associated with host growth in mouse models of postnatal human gut microbiota development.

Currently, the World Health Organization recommends high-dose vitamin A supplementation for infants and children in high-risk areas, for good reason. Deficiency in vitamin A, which plays important roles in vision, growth, and immune function, is a significant public health problem in more than half of all countries. It is the leading cause of preventable blindness in children and increases the risk of disease and death from severe infections. In pregnant women, vitamin A deficiency causes night blindness and may increase the risk of maternal mortality.

Although adequate levels of vitamin A are crucial for survival, some evidence suggests that micronutrient supplementation can actually cause health problems. The new findings add to these concerns, raising the worrying possibility that vitamin A supplementation might have the unintended consequence of inhibiting the growth of infants and children. But for now, there is not enough evidence to conclude that vitamin A imbalances influence host growth through their effects on B. vulgatus.

“However, our results provide a rationale and a preclinical method for examining whether current vitamin A dosing regimens, and by extension other critical micronutrients, have unintended and deleterious effects on the developing gut microbiota of undernourished children, whose healthy growth such treatments are intended to promote,” Osterman says.