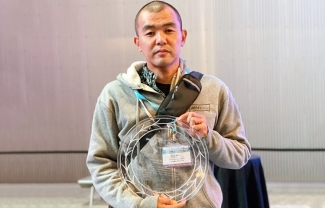 And he’s had his eye on it for more than a decade.

Research Assistant Professor Yasuyuki Kihara, Ph.D., has won an Eicosanoid Research Foundation (ERF) Young Investigator Award, which is presented every other year to three early-career faculty researchers who have made breakthroughs in the field of bioactive lipids.

The award may not come with a cash prize, but for Kihara, this prize is priceless.

“The first time I applied for this award was around 2009, and I’ve applied several times since then,” he says. “This has been many years in the making, and I’m incredibly honored to receive this award.”

Kihara has devoted his scientific career of more than 20 years to studying bioactive lipids, a broad group of molecules that cells use to communicate and to control their activities. Some of the most well-known examples of bioactive lipids are the hormones testosterone and estrogen, but there are countless other examples in different parts of the body as well.

“Bioactive lipids are involved in signaling in every cell of every organism,” says Kihara. “Lipids are essential for life, and I’m not sure I could even imagine a biological process or a pathway that doesn’t involve a lipid at some step.”

Kihara’s work focuses on multiple sclerosis (MS), a potentially disabling disease of the brain and spinal cord that affects the brain’s ability to communicate with the rest of the body. MS occurs when protective structures in our neurons, called myelin sheaths, become damaged.

“Losing this myelin makes it much more difficult for the brain to send signals to other parts of the body,” says Kihara. “This causes a wide range of symptoms that can be debilitating for the people living with this disease.”

In 2010, FDA-approved an oral drug for MS called fingolimod. Fingolimod has a chemical structure that resembles a bioactive lipid, and Kihara has teamed up with Professor Jerold Chun, M.D., Ph.D., to study how this drug works at the molecular level to explore whether there may be other ways to leverage bioactive lipids against MS.

“We believe that cellular signaling pathways and the bioactive lipids that control them may have a more complicated role in MS than is currently understood,” says Kihara. “Studying these molecules at this fundamental level will help reveal new ways of treating the disease.”