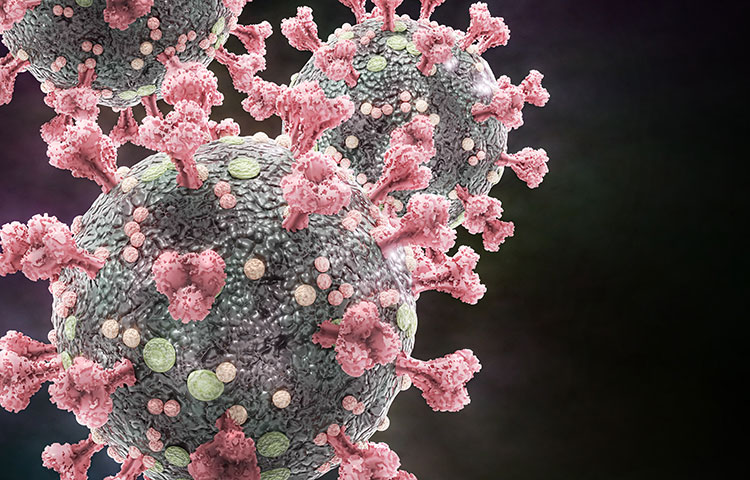 The study was published in the journal Molecular Cell.

“We wanted to gain a better understanding of the cellular response to SARS-CoV-2, including what drives a strong or weak response to infection,” says Sumit K. Chanda, Ph.D., professor and director of the Immunity and Pathogenesis Program at Sanford Burnham Prebys and lead author of the study. “We’ve gained new insights into how the virus exploits the human cells it invades, but we are still searching for its Achille’s heel so that we can develop optimal antivirals.”

Soon after the start of the pandemic, clinicians found that a weak interferon response to SARS-CoV-2 infection resulted in some of the more severe cases of COVID-19. This knowledge led Chanda and his collaborators to search for the human genes that are triggered by interferons, known as interferon-stimulated genes (ISGs), which act to limit SARS-CoV-2 infection.

Based on knowledge gleaned from SARS-CoV-1, the virus that caused a deadly, but relatively brief, outbreak of disease from 2002 to 2004, and knowing that it was similar to SARS-CoV-2, the investigators were able to develop laboratory experiments to identify the ISGs that control viral replication in COVID-19.

“We found that 65 ISGs controlled SARS-CoV-2 infection, including some that inhibited the virus’ ability to enter cells, some that suppressed manufacture of the RNA that is the virus’s lifeblood, and a cluster of genes that inhibited assembly of the virus,” says Chanda. “What was also of great interest was the fact that some of the ISGs exhibited control across unrelated viruses, such as seasonal flu, West Nile and HIV, which leads to AIDS”.

“We identified eight ISGs that inhibited both SARS-CoV-1 and CoV-2 replication in the subcellular compartment responsible for protein packaging, suggesting this vulnerable site could be exploited to clear viral infection,” says Laura Martin-Sancho, Ph.D., a senior postdoctoral associate in the Chanda lab and first author of this study. “This is important information, but we still need to learn more about the biology of the virus and investigate if genetic variability within these ISGs correlates with COVID-19 severity.”

As a next step, the researchers will look at the biology of SARS-CoV-2 variants that continue to evolve and threaten vaccine efficacy. Martin-Sancho notes that they have already started gathering variants for laboratory investigation,

“It’s vitally important that we don’t take our foot off the pedal of basic research efforts now that vaccines are helping control the pandemic,” concludes Chanda. “We’ve come so far so fast because of investment in fundamental research at Sanford Burnham Prebys and elsewhere, and our continued efforts will be especially important when, not if, another viral outbreak occurs.”

Research reported in this press release was supported by DoD grants W81XWH-20-1-0270; DHIPC: U19 AI118610; and Fluomics/NOSI: U19 AI135972. It was also supported by generous philanthropic donations from Dinah Ruch and Susan & James Blair, from the JPB Foundation, the Open Philanthropy Project (research grant 2020-215611 (5384)) and anonymous donors. Additional support has been provided by DARPA grant HR0011-19-2-0020 and by CRIP (Center for research on Influenza Pathogenesis), a NIAID-funded Center of Excellence for Influenza Research and Surveillance (CEIRS, contract # HHSN272201400008C). This work was additionally supported by the following grants to Northwestern University Feinberg School of Medicine: a CTSA supplement to NCATS: UL1 TR002389; a CTSA supplement to NUCATS with the generous support of the Dixon family: UL1 TR001422; and a Cancer Center supplement: P30 CA060553. Additional support was provided by the following grant to JG at UC San Diego: NIH grant R37AI081668. This work was also supported by a generous grant from the James B. Pendleton Charitable Trust.

The authors declare no competing interests.