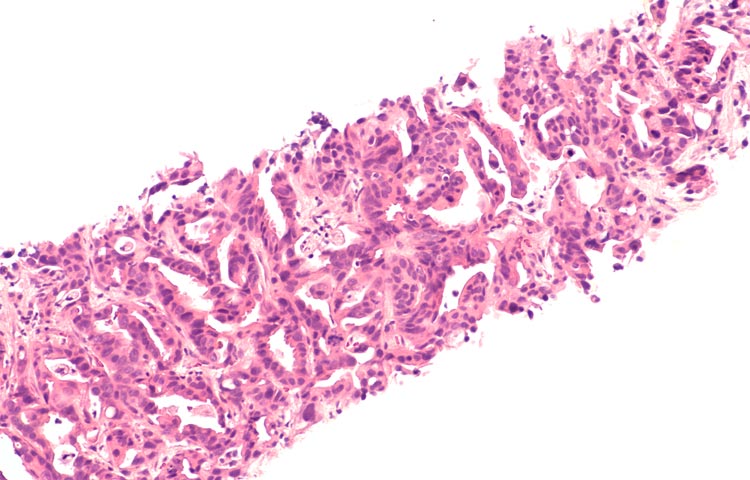 Scientists at Sanford Burnham Prebys Medical Discovery Institute have uncovered a novel drug target, a protein called PPP1R1B, that stops the deadly spread of pancreatic cancer, called metastasis, when inhibited in mice. Published in Gastroenterology, the findings are a first step toward a potential treatment for one of the deadliest cancers known today.

“Our study uncovers a protein, called PPP1R1B, that is completely new to pancreatic cancer researchers and that drives tumor metastasis, the major reason the cancer is so lethal,” says Anindya Bagchi, Ph.D., associate professor in the Tumor Initiation and Maintenance Program at Sanford Burnham Prebys and senior author of the study. “With this proof-of-concept data, we can start drug screens that identify an inhibitor of PPP1R1B, which, if successful, may help more people survive pancreatic cancer.”

Pancreatic cancer is one of the deadliest cancers: Fewer than 10% of people with this type of cancer remain alive five years later. The tumor is difficult to detect because symptoms often don’t appear until the disease has already metastasized. However, if the tumor is contained in the pancreas, the five-year survival rate increases to nearly 40%, according to the American Cancer Society. For unknown reasons, pancreatic cancer is on the rise and predicted to become the second-leading cause of cancer-related deaths in the U.S. by 2030.

In the study, the scientists set out to understand how pancreatic cancer responds to oxygen deprivation (hypoxia). Cancer researchers have long wondered how pancreatic cancers are able to thrive in such a harsh environment—and speculated that increased production of hypoxia inducible factor 1 alpha (HIF1A), a gene triggered by hypoxia, can stimulate tumor growth. Drugs that inhibit HIF1A are being explored for many hypoxic cancers, but until now the protein’s role in pancreatic cancer was unclear—presenting a hurdle to clinical trials evaluating these potentially promising drugs.

As a first step, the scientists created mice with pancreatic tumors that do not produce HIF1A. They expected that removing this protein would be beneficial and allow the mice to become cancer free. However, to their surprise, these mice had more aggressive tumors—with more invasion into nearby organs, greater metastasis and shorter survival times.

“Our original hypothesis was that if we remove HIF1A, a supposed driver of tumor survival, growth should be delayed or we should be curing the cancer,” says Bagchi. “Instead, we got the exact opposite results. When we saw this, we knew that we may have hit something really interesting, and needed to nail down exactly why we are seeing this effect.”

Digging deeper, the scientists discovered that these mice had increased levels of a protein called PPP1R1B. When they removed the gene that codes for this protein, the mice had fewer metastases—suggesting that a drug that inhibits the protein would stop pancreatic cancer from spreading.

“Our data also showed that tumor samples from people with metastatic pancreatic cancer had increased levels of PPP1R1B, adding further evidence that the protein has therapeutic potential,” says Ashutosh Tiwari, Ph.D., postdoctoral associate in the Bagchi lab at Sanford Burnham Prebys and first and co-lead author of the study. “Elevated levels of PPP1R1B have also been found in colon, lung and prostate cancers, and might also be seen in other hypoxic tumors, so an inhibitor may have benefits beyond pancreatic cancer.”

Next, the scientists plan to start drug screens that seek to identify compounds that inhibit PPP1R1B. These activities will take place at the Institute’s Conrad Prebys Center for Chemical Genomics, one of the most advanced drug discovery centers in the nonprofit world.

“The path to a successful treatment for pancreatic cancer begins with a strong scientific understanding of what is driving the tumor’s growth and aggressiveness,” says Lynn Matrisian, Ph.D., chief science officer at the Pancreatic Cancer Action Network (PanCAN), who wasn’t involved in the study. “This study has uncovered a promising drug target that, following additional research, may one day result in a treatment that helps more people fight the world’s toughest cancer.”