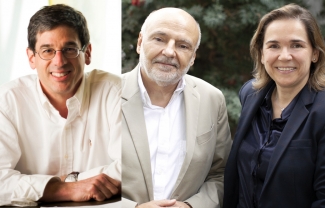 Innovation and Collaboration of the Year Awards

The San Diego cancer community—including oncologists, oncology nurses, radiologists, cancer researchers and their friends and family—gathered on September 22 to celebrate progress made in reducing cancer deaths and recognize exceptional individuals and institutions at the inaugural American Cancer Society’s Celebration of Cancer Care Champions in San Diego.

More than 40 finalists were selected, including Sanford Burnham Prebys professors Robert Wechsler-Reya, Ph.D., who received the Innovation of the Year award for his team’s creation of a new model for studying a brain tumor that commonly arises in infants; and Jorge Moscat, Ph.D., and Maria Diaz-Meco, Ph.D., who received the Collaboration of the Year award for their partnership with clinicians at Scripps Clinic who uncovered a novel way to potentially identify a deadly form of colorectal cancer.

Nominations were reviewed by an independent review committee composed of representatives from 10 leading healthcare and research institutions, including Celgene, Kaiser Permanente, Rady Children’s Hospital, Scripps MD Anderson Cancer Center, Moores Cancer Center at UC San Diego Health and more. (Note: Members of the review committee did not score nominations for their own institutions.)

Read on to learn more about our award-winning research:

Innovation of the Year: A new model for studying brain tumors that strike infants
Robert Wechsler-Reya, Ph.D., a professor at Sanford Burnham Prebys and program director of the Joseph Clayes III Research Center for Neuro-Oncology and Genomics at the Rady Children’s Institute for Genomic Medicine, was honored for his development of a novel mouse model of a pediatric brain tumor called choroid plexus carcinoma. This tumor most commonly arises in infants under the age of one who are too young to undergo radiation treatment. Until now, drug development has been hindered by the lack of models that could help researchers better understand the cancer. Wechsler-Reya and his team have already used the model to identify potential drug compounds that may be therapeutically useful.