Duchenne muscular dystrophy: How muscle cells journey to the dark side 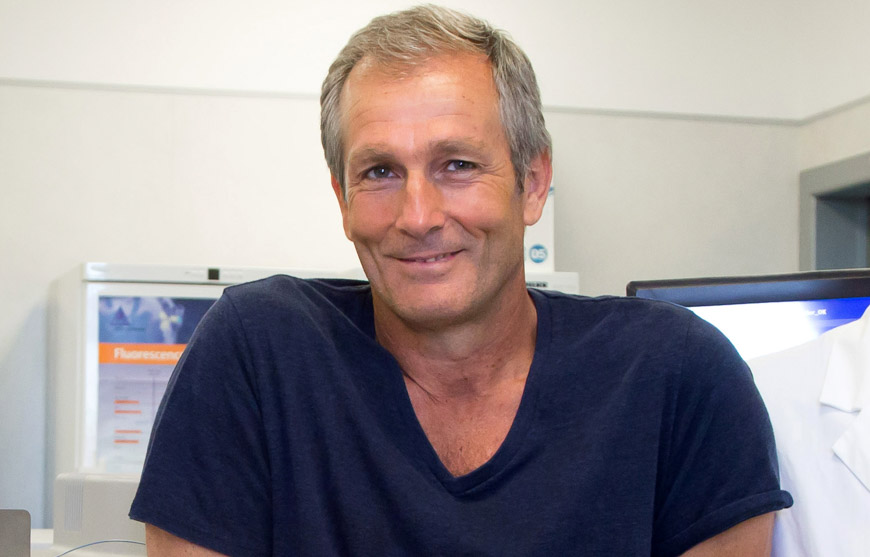 Promoting repair of dystrophic muscles is a major goal in the treatment of muscular dystrophies but is complicated by the incomplete knowledge of the cellular and molecular events that drive muscle regeneration.

Now, scientists at Sanford Burnham Prebys Medical Discovery Institute (SBP) have revealed that FAPs don’t have just one identity—but several distinct identities that emerge during key stages of muscle regeneration. Importantly, the FAPs that drive the symptoms of DMD have defined markers, meaning they could be targeted for drug development. The study was published in Nature Communications.

"There is increasing evidence from mouse studies that FAPs may play a critical role in muscle regeneration,” says Grace Pavlath, Ph.D., senior vice president and scientific program director of the Muscular Dystrophy Association (MDA). “This study provides further insight into the mechanisms underpinning impaired regeneration and the development of fibrosis in DMD, and suggests future avenues for therapeutic intervention."

DMD mostly affects boys and is caused by the absence of a muscle-strengthening protein called dystrophin. Over time, muscle is replaced by scar tissue and fat, a process called fibrosis that ultimately leads to muscle wasting and weakness. Most people with DMD do not survive past their mid-20s.

“While advances are being made, there is still an urgent need for effective treatments for DMD,” says Pier Lorenzo Puri, M.D., senior author of the study; professor in the Development, Aging and Regeneration Program at SBP; and lab director at Fondazione Santa Lucia IRCCS. “This discovery reveals novel cell targets for selective interventions that may promote regeneration and prevent fibrosis in DMD muscles.”

Adds Filippo Buccella, founder of the Duchenne Parent Project Italy, part of an international federation created by parents to accelerate the development of new therapies, "This major advancement sheds a new light on the complex process of muscle degeneration/regeneration and may indeed improve the lives of Duchenne patients and their families. This breakthrough comes years after working with skilled physicians and great scientists like Dr. Puri, and it will be invaluable for the many patients and families who as of today are involved worldwide with experimental clinical trials.”

Puri’s team analyzed the transcriptome of single FAP cells, which shows the genes that are turned on or off, from samples of muscle tissue obtained from mouse models of acute injury and DMD. This work identified cellular markers unique to a subpopulation of FAPs (sub-FAPs).

The scientists then applied the transcriptome analysis to each of the identified sub-FAPs to track the relative amounts of gene expression and types of genes expressed in three settings of muscle regeneration: following acute injury; during DMD; and immediately after birth, which uses a different regeneration process from adult muscle repair.

“Importantly, this analysis revealed an association between these functional states and the inflammatory response of regenerating muscles,” says Puri. “We observed that during acute injury, the inflammatory infiltrate—specifically macrophages—promptly cleared Vcam1-expressing sub-FAPs. This restricts their pro-fibrotic activity to transient collagen deposition, which favors optimal muscle stem cell division. However, in experimental conditions of macrophage depletion or in DMD muscles, in which macrophage activity is altered, an impaired clearance of Vcam1-expressing sub-FAPs resulted in chronic deposition of collagen and muscle fibrosis—one of the most deleterious events in DMD progression.”

Adds co–first author Barbora Malecova, Ph.D., former postdoctoral researcher in Puri’s lab at SBP and current scientist at Avidity Biosciences, LLC, “This study elucidates the cellular and molecular pathogenesis of muscular dystrophy. These results indicate that removing or modulating the activity of Vcam1-positive sub-FAPs, which promote fibrosis, could be an effective treatment for DMD.”

“This work paves the way for pharmacological manipulation of FAPs, in order to correct their aberrant behavior in muscular diseases,” says Puri. “For instance, the identification of drugs that can target Vcam1-expressing sub-FAPs might inspire therapeutic interventions toward preventing fibrosis in muscular dystrophies. It is also possible that existing drugs have this potential, and we are now exploring the effect of histone deacetylase (HDAC) inhibitors, which have shown beneficial effects (anti-fibrotic) in muscles of mouse models of DMD, in preclinical studies and in DMD boys in recent clinical trial.”

Research reported in this press release was supported by National Institutes of Health (NIH) grants P30AR061303, R01AR056712, R01AR052779, and P30AR061303; California Institute for Regenerative Medicine (CIRM) grant TG2-01162; the Muscular Dystrophy Association (MDA), the French Muscular Dystrophy Association (AFM); and EPIGEN. The content is solely the responsibility of the authors and does not necessarily represent the official views of the NIH. The study’s DOI is 10.1038/s41467-018-06068-6.